The purpose of language is to communicate, right?  Seems obvious.  In fact, it is not so obvious.  One way in which language is not clearly about communication per se is when we use language to do things.  Consider the following, from the introduction to the paper Speech act distinctions in syntax, by Jerry Sadock and Arnold Zwicky.  They refer to “communicative tasks,” which sounds like a counter to my claim here, but I think it’s a bit of a misnomer: they are mixing together things that are mainly communicative (e.g. “express surprise or dismay”) with things for which “task” would be a more appropriate label: 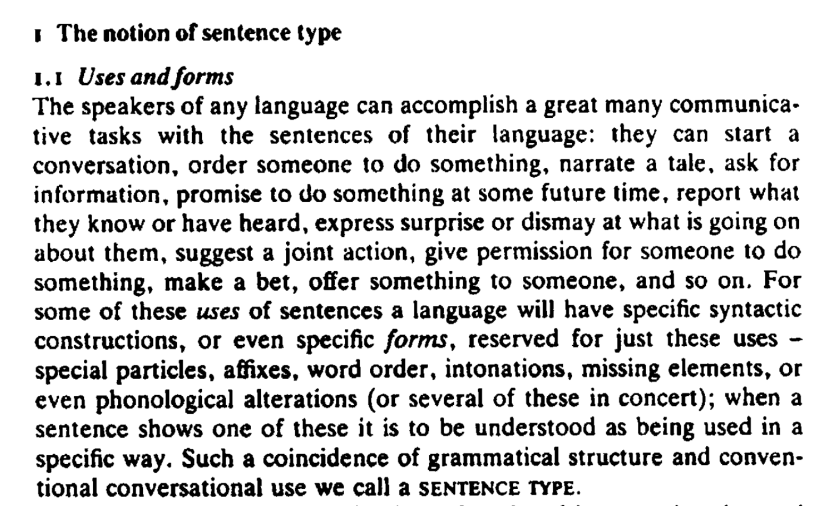 Consider, for example, the following:

I now pronounce you man and wife.

It is by saying those words of the (more or less) traditional American wedding ceremony that one performs the action of marrying someone.  Or this:

I promise to try to do better.

Again, it is precisely by saying that sentence that one performs the action of making a performance.  Certainly there’s some communication going on both in I now pronounce you man and wife and I promise to try to do better, but there’s a whole lot more going on than communication, too–in the first case, you are committing two people to sleeping with each other and no one else (presumably until death does them part), while in the second case, you are causing a commitment to exist on your part where no such commitment existed before.

Recently we’ve been talking a lot about tag questions, and tag questions are one of the kinds of “sentence types” that Sadock and Zwicky talk about.  (I think that’s Sadock’s handwriting on the scan of the paper title that you see at the top of this post, by the way.)  They point out a quirk of English tag-questions that we haven’t talked about before: you can say them with different intonation patterns, and the different patterns do pretty different things.

Native speakers of English have a tendency to respond to a tag question according to the response that the question is intended to evoke.  Children are quite likely to do this, and lawyers use tag questions in the court room to try to get witnesses to answer as the lawyer would like them to.  See this post for more on that topic.

Rather than having as their goal the garnering of information, these really amount to statements that carry with them the demand that the addressee express his agreement or disagreement.

Back to their “coffee” examples:

See these posts for the following:

3rd person singular tag questions with the verb is

3rd person plural tag questions with the verb are

So, yeah: the tag question construction seems simple, but it’s actually pretty complex, in a lot of ways.  In fact, English tag questions can be quite difficult for non-native speakers to learn to use, and that’s why we’ve been drilling them recently.

We’ve been working on tag questions with the verb to be recently.  We worked on the third person singular (Trump is an asshole, isn’t he?) and the third person plural (Trump and his cronies ARE the swamp, aren’t they?).  We did that in the present tense–let’s try the past tense now, ’cause the verb in the tag has to agree with the verb in the base sentence with respect to tense.  (Still think that tag questions are simple?)

We’ll follow our usual structure for drills–half a dozen on the same model, half a dozen on a similar model, and then mix ’em up.  Remember: we’re not testing ourselves–we’re practicing.  This is fun!  (…and this is why I never get a second date.)

…and now the opposite polarity:

5 thoughts on “Coffee is expensive, isn’t it: Tag questions in English III”