It’s the political season in many parts of the world.  Lots of Europe is having elections, and the presidential campaign is well along in the United States.  Last night there was a debate amongst the contenders for the nomination for Republican presidential candidate.  Jeb Bush attacked his erstwhile protege, and now opponent, Marco Rubio over his attendance record in the Senate, saying “The Senate, what is it like a French work week? You get, like, three days where you have to show up?””  Hearing this, I was struck by the difference between “in theory” and “in practice” that is ever-present in France.  In theory, France has a 35-hour work-week (versus 40 hours in the US).  In practice, only about 50% of the French working population qualifies for the restriction.  The lab where I work when I’m in France qualifies for the 35-hour week in theory, but in practice, they have a 37.5 hour work-week, the idea being that they get more holidays than most people, so it balances out.  37.5 hours in theory, mind you–in practice, I frequently get responses to emails at midnight.

With politics being a hot topic in the French news right now, we need some new vocabulary if we’re going to be able to listen to the news on the way to work in the morning.  A word that’s been coming up quite a bit lately is politique.  It has a number of meanings:

You probably noticed that this is one of those nouns that has different meanings depending on whether it’s masculine or feminine.  Masculine: a politician.  Feminine: politics or policy.

Putting together this blog post on the word politique, I was reminded of the “politic worms” of Hamlet:

Not where he eats, but where he is eaten. A certain convocation of politic worms are e’en at him. Your worm is your only emperor for diet. We fat all creatures else to fat us, and we fat ourselves for maggots. Your fat king and your lean beggar is but variable service—two dishes, but to one table. That’s the end.

The Shakespeare Navigators web site translates politic here as “crafty, prying.”  I don’t know whether or not that pejorative meaning is intended–the Oxford English Dictionary says that during the same period, it could also mean “prudent, shrewd, sagacious.”  Given Hamlet’s overall affect in that scene, I guess that the pejorative interpretation is probably justified.  In any case: a great image to keep in mind as you listen to the political news these days.

News stories are one of the great ways to start your day with an encounter with Zipf’s Law–by virtue of being the “new”s, they bring new words into your life, and by virtue of things usually staying in the news for a few days, you’ll get to review them in the days to come.  I’ve found a great French news podcast, and I like to listen to it on the way to work every morning.  (Sorry–I can’t find a web page, but you can see their Twitter feed here.  Try searching iTunes for France Culture Matin.)  My command of French being as weak as it is, I run into Zipf’s Law in the first sentence every morning.  The announcer always opens the broadcast with  Bon jour, bon réveil a tous.  What the heck is réveil?  Turns out that it has multiple meanings.

Yesterday I talked about the cute video about the guy and his cat.  In the video, the guy says that one good thing about having a cat is that it can be a réveil–alarm clock–for you.  (He also says that the bad thing is that the time is completely random.)

One evening I had a glass of wine with the beautiful Françoise after work.  At the end of the evening, she either told me that she was going to visit her mother in Brittany for Christmas Eve, or that we should get together for Christmas Eve.  My French is so bad that I couldn’t tell, and no matter how many times I ask her to repeat herself, she never seems to believe that I don’t understand half of what I hear.  I didn’t know what was happening on Christmas until I got a text from her on Christmas Eve saying that the only lift that she could find to the réveillon that we were apparently going to in the ‘burbs was on a motorcycle.  Zipf’s Law!

Now, where there’s a noun, you might suspect that there’s a verb, and sure enough, we have one:

Where does all of this come from?  I would guess from this verb:

Bon réveil, and may the odds of Zipf’s Law be ever in your favor!

I’m interested in the verb rendre today, for no good reason other than that I never seem to be able to remember what it means.  Unlike most of the words that we talk about on this blog, rendre is actually pretty high-frequency.  Its basic meaning is “to give back.”  I saw it recently in an adorable video in which this young French guy talks about his cat: “I love my cat, et il sait me le rendre–and he knows how to give it back to me.”  (The camera then cuts to footage of the cat puking on the floor.  I think the young guy is actually a professional comedian, but can’t swear to it.  His YouTube channel has 6.5 million followers, in any case.)

Perhaps part of the reason that I can’t seem to remember the basic meaning of rendre is that it has so many other meanings.  Let’s look at a couple of useful ones:

Listening to the news this morning, I heard an interesting new term.  Part of what was interesting was that the broadcaster felt it necessary to explain what the term meant.  The term was la frappe oblique, or “oblique strike.”  If I understood the story correctly (never a given), there is a European commission meeting on the subject of what to do about Islamic State (usually referred to as Daesh in French, the same as in Arabic) plans for “oblique strikes.”  As the broadcaster explained, an “oblique strike” is carried out by having a citizen of one European country carry out a terrorist attack in another European country.  The idea is that if you have, say, a French citizen who is associated with a terrorist group, that person might be under investigation by the French police, but they won’t be under surveillance by, say, the German or Spanish police.  Within the Schengen Area (the territories of the 26 European countries that don’t have any restrictions on travel between them), that French citizen could travel to any other country–say, Germany–at which point they drop off of the French police’s radar, and are much freer to carry out an attack.

It’s so nice to have terms explained on French radio.  Even in your own native language (that’s English for me, not French), Zipf’s Law strikes on occasion.  As a side note, the ability of speakers of a language to explain words to one another is theoretically interesting to some extent, as on a very strong version of structuralism, it shouldn’t be possible for them to do that.  Clearly we can.  That doesn’t negate more reasonable versions of structuralism, though–it’s a useful way of thinking about language.

The Saturday Morning Breakfast Cereal from the 24th: 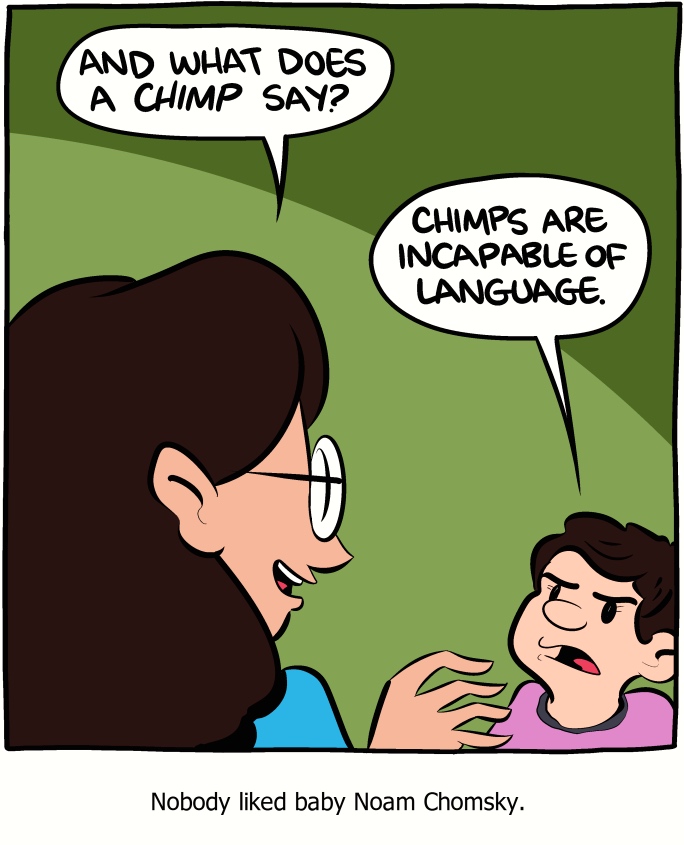 And no wonder: Baby Noam knows enough about Language to start a sustained argument that animals don’t have it, but not enough about the details of English to understand that the woman was asking what the conom (conventional onomatopoetic word — see discussion in the last section of my posting on Liam Walsh) is in English for the sound made by a chimp. (Note: there isn’t one, so far as I know). The facts of English usage in this domain are fairly complex, but little kids (other than Baby Noam, it seems) manage to cope very well with it.

In English, the spelling of a word doesn’t tell you how to pronounce it—it just gives you some clues about how to pronounce it. Through, though, tough, and plough are famous examples.  French is the same. But, even more so, it’s the case that in French, knowing how to pronounce a word only gives you the slightest clue how to spell it. In a previous post, we looked at several ways to spell words that sound like mur. Here are nine different words that all sound identical in French. Specifically, they all sound like the English word oh:

Can you add any more words to my list of French words that are pronounced o?  If so, how about putting them in the Comments section?

Randomly Googling Zipf’s Law, I came across this web page that talks about one aspect of the significance of Zipf’s Law for natural language processing–that is, getting computers to deal with human language.

The page is on the web site for A.L.I.C.E., a computer program that uses frequently-occurring patterns to give the appearance of understanding, and replying to, things that are “said” to it in English.  The page points out that for A.L.I.C.E., there’s an advantage that comes from Zipf’s Law: it means that a relatively small number of patterns encoded into A.L.I.C.E. allow it to process a very large percentage of the things that people say to it.  Here are the most common things that people “say” to A.L.I.C.E.:

Of course, the flip side of Zipf’s Law for natural language processing is that an enormous number of the inputs to your program will only occur very infrequently, and it’s going to be very difficult to cope with all of those.  Zipf’s Law cuts both ways.

Here are some words that I didn’t know on the French Wikipedia page about artificial intelligence: