to delight in: to really enjoy doing something; to like a thing very, very much. Examples:

Trump delights in insulting people who are less powerful than he is. Fucking bully–nothing more despicable than a fucking bully.

Trump delights in his ability to insult women’s appearance on the world stage. What a loser.

How it’s used on the sign: Delight in treasures old and new.

Brought to you by the Anglophone Association for the Promotion of Weird Prepositions.

Thanks to the person who posted this on my Facebook timeline–you shall remain anonymous, since you probably would not want it known that you know me far too well.

This little gem of humor about the realities of translation/interpretation uses a number of devices from very colloquial written English.  Three of them:

Wanna: want to. “Now I really wanna see a horrible faltering translation from one of these movies…”

Cuz: because.  Can also be written ’cause or cos, and cuz can also be “cousin.”

The thing is:  This is used to introduce an assertion that … hm… states some kind of problem or complication with whatever it is that is under discussion.  For example: Zipf, are you going to the lab meeting?  Well…the thing is, I double-booked myself at 1.  In the material, when the person says (I’m going to insert some punctuation, which will make it a lot easier to follow) the thing is, in one dialect this word is the name of a terrifying Demon but in a completely different language from the same area that… the “thing under discussion,” if you like, is the fact that the person is being expected to be able to translate this stuff (but there’s this complication related to the multiple possible meanings of the word in question).

Note that if you’re being really casual, you can shorten this to just thing is… omitting the “the.” 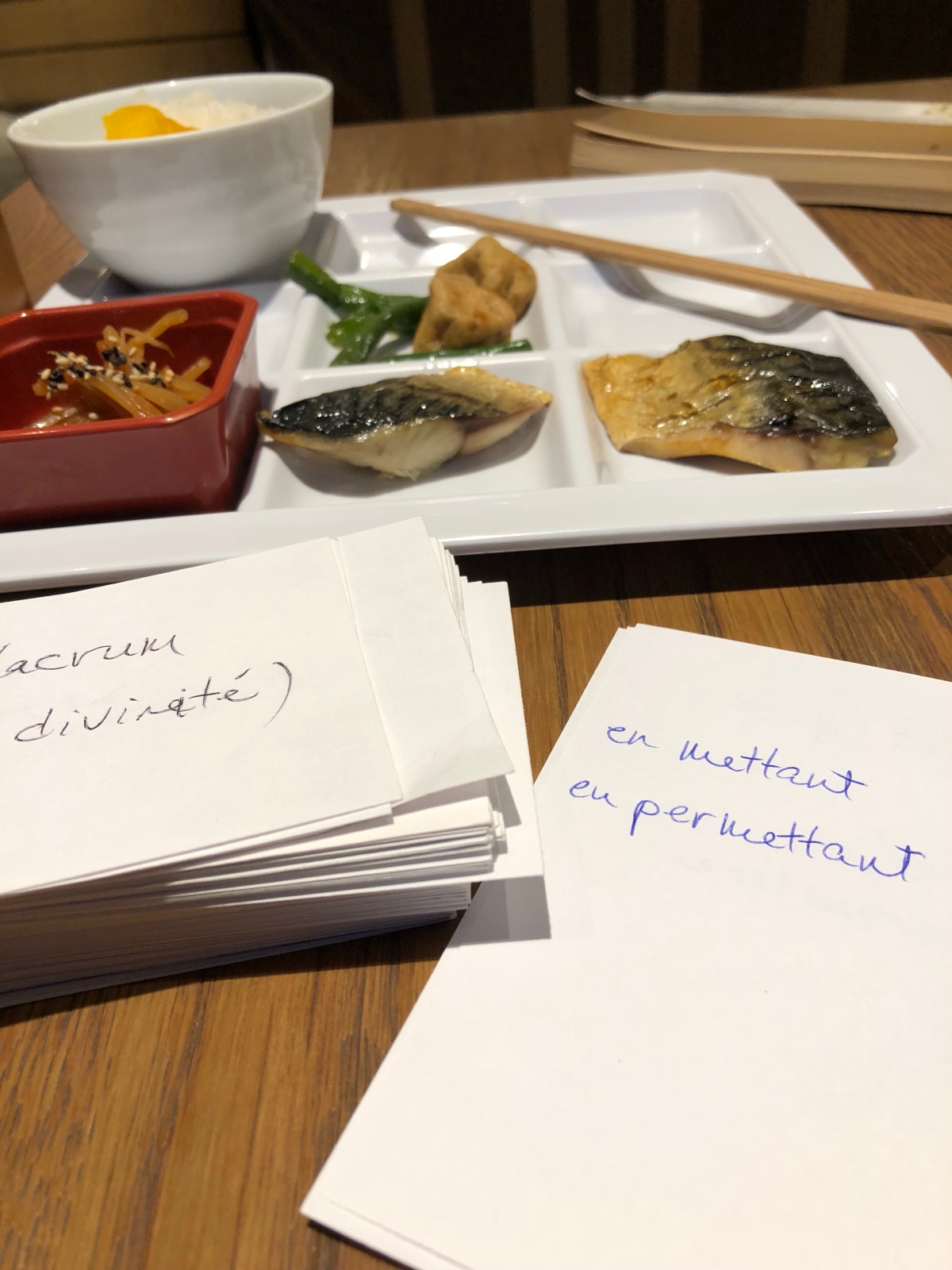 Zipf’s Law: The frequency of a word is related exponentially to its rank in a frequency-ordered list. Practically speaking, this means that an adult studying a second language will run across words that they don’t know every day of their life.

To paraphrase Newton: if I speak better French than other Americans, it is only because I spend more time memorizing vocabulary.  My daily, daily, daily morning ritual: with my first cigarette and cup of coffee, I memorize 10 new words.  Zipf’s Law being what it is, I don’t exactly have to go hunting for words that I don’t know—over the course of the day, I note down every new word that I come across, and the next morning, I pick 10 of them to cram into the small amount of remaining space in my much-abused brain.

My go-to dictionaries are WordReference.com, followed by the Farlex French dictionary app.  If I’m pretty sure that I need more context, I go to the Sketch Engine web site if I have Internet access, and Linguee if I don’t.  Pretty straightforward, my little routine.  Quotidian.  Mundane.

Every once in a while, though, it does not yield the desired result.  Case in point: capillotracté.  Not in Word Reference, not in Farlex French.  So: Google… which gets me definitions that I don’t understand, because they make reference to an expression that I don’t understand: tirer quelqu’un par les cheveux.  And so, dear Readers: can you help an amerloque out?

My odyssey started in a place where you don’t expect to see casual use of language: Le Figaro.  The Fig’ is one of the Big 3 French newspapers, along with Libération (left) and Le Monde (center).  As you have probably guessed, Le Figaro is to the right of center.  Like many conservative people, it gets excited about prescribing language usage.  I don’t get excited about prescribing language usage, but I do get excited about language, so although I subscribe to Le Monde (I’m a lefty myself, but I figure that I’ll get the most representative sample of vocabulary more towards the center), I will often go to the Fig’ to read its language articles.  As you might expect from prescriptivists, they tend to be…precise.  Clear.  Unambiguous.  (Si ce n’est pas clair, ce n’est pas français, right?  Harumph.).

So, I’m reading an article on the subject of how to refer to Line 1 of the Paris metro—ligne un, or ligne une?—when I come across a word that I don’t know. I promptly copy it, along with the context in which I saw it, onto an index card (something that does not exist in France–see this post on the mystery):

The next morning, I go to look it up–and find nothing. Word Reference: no love. The Farlex French dictionary app: nope. Fine–I go to Google. I find definitions there, but they all refer to an expression whose meaning is opaque to me: tirer quelqu’un par les cheveux. For example: 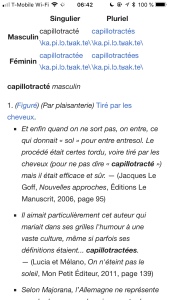 How about it, native speakers?  Can you help an amerloque out?  I’d pull my hair out over this, but I’m already bald…

l’amerloque: American, person or language; noun or adjective. Familier et péjoratif.  Wiktionnaire alleges that it comes from Amérique plus oque, providing no evidence; I therefore claim equal plausibility for my own little theory, which is that it comes from Amérique plus locuteur.  Examples from Wiktionnaire, from which I stole them quite gleefully ’cause I don’t like their etymology:

makeover: “An overall treatment to improve something or make something more attractive or appealing.” (Source: American Heritage® Dictionary of the English Language, Fifth Edition. (2011). Retrieved September 11 2018 from https://www.thefreedictionary.com/makeover.)  There is an enormous quantity of makeover-themed TV shows.  Don’t judge me.

consult (noun): As a noun, this is stressed on the first syllable: CONsult.  A consult is when you send someone or something to an expert, typically in a medical context.  For example, if you go to your doctor and they are pretty sure that you are having a neurological problem, they might tell their clerk to set you up with a neurology consult.

In coming up with a title for this article, I thought about Vocabulary consult versus Vocabulary makeover.  The former would make a hell of a lot more sense, but since the word that I’m asking you to help me with has something to do with hair, I went for Vocabulary makeover.  Don’t like my choice?  Write your own fucking blog on the implications of the statistical properties of language for second-language learners.

to pull one’s hair out (over something): to have reached the point of frustration with a problem and still be unable to solve it.  Examples:

Bill, can you help me?  I’m pulling my hair out here… Every time I call the constructor, I get a “String Index Out Of Bounds” error, which makes no sense to me whatsoever…

Dude, I’m pulling out my hair out over this budget. Every time I try to include the annual COL increase for salaries, the spreadsheet doubles the amount allotted for travel to the American Medical Informatics Association annual meeting. What the FUCK??

How I used it in the post: How about it, native speakers?  Can you help an amerloque out?  I’d pull my hair out over this, but I’m already bald…

…’cause how often do you come across your copy of Mana Strickland’s “Say It In Rarotongan”?