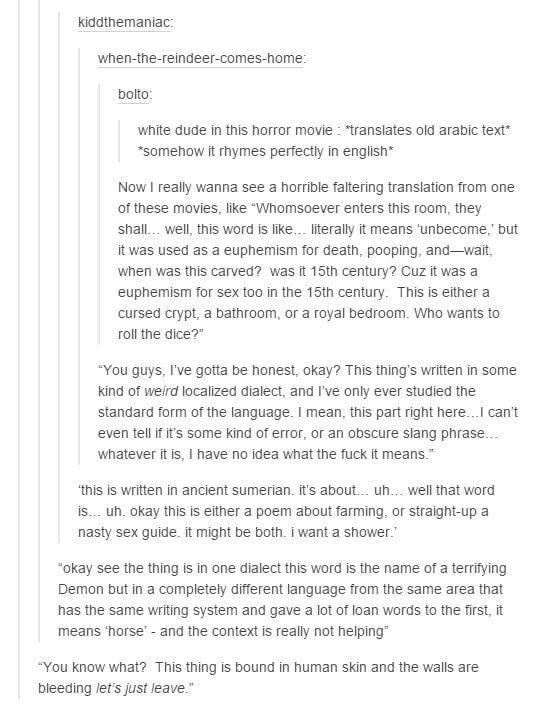 Thanks to the person who posted this on my Facebook timeline–you shall remain anonymous, since you probably would not want it known that you know me far too well.

This little gem of humor about the realities of translation/interpretation uses a number of devices from very colloquial written English.  Three of them:

Wanna: want to. “Now I really wanna see a horrible faltering translation from one of these movies…”

Cuz: because.  Can also be written ’cause or cos, and cuz can also be “cousin.”

The thing is:  This is used to introduce an assertion that … hm… states some kind of problem or complication with whatever it is that is under discussion.  For example: Zipf, are you going to the lab meeting?  Well…the thing is, I double-booked myself at 1.  In the material, when the person says (I’m going to insert some punctuation, which will make it a lot easier to follow) the thing is, in one dialect this word is the name of a terrifying Demon but in a completely different language from the same area that… the “thing under discussion,” if you like, is the fact that the person is being expected to be able to translate this stuff (but there’s this complication related to the multiple possible meanings of the word in question).

Note that if you’re being really casual, you can shorten this to just thing is… omitting the “the.”