Why are Parisian streets wide? They mostly aren’t, and that has everything to do with surviving the zombie apocalypse. 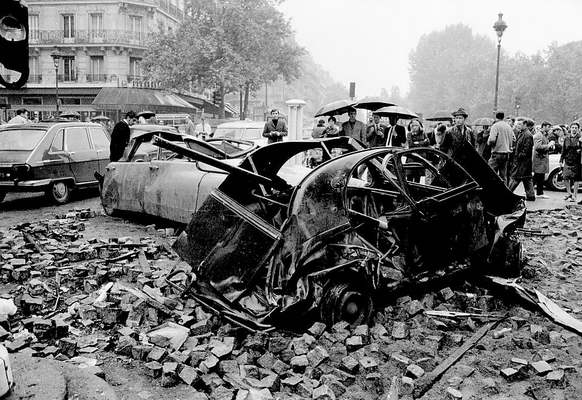 I recently read a news story on the subject of the best and worst cities for surviving the zombie apocalypse.  The model took some reasonable things into account–ability to maintain a food supply, ease of containment, stuff like that.  Scores ranged from a low of 8.69 (New York, at 53rd place) to 48.33 (Boston, in first place).  (You have to know the range of a number to have the faintest clue how to interpret it.)  However, ultimately, the model is bullshit.

Here’s the thing: first of all, the study only looked at US cities.  Excuse me: most people in the world are not in the US, and if the US hopes to survive the zombie apocalypse, it’d better hope like hell that the rest of us do, too.  Second of all: most of the things in the model had to do with the ability of the city to deal with the virus, while none of them had to do with the ability of the city to deal with the zombies.  When you introduce the basic physical geography of the city itself into the model, Paris starts looking really good, for the following reason: our many tiny streets will be easy to keep the zombies out of, because they present relatively small openings at each end.  A Special Forces friend once told me this: the purpose of a wall is so that you can shoot people as they come around it.  The tiny openings on our tiny streets will make them easy to barricade, so it will be easy to nail the zombies as they try to get past the barricades.

Now, I know what you’re thinking: Paris is all wide, tree-lined boulevards, right?  Some of it is, sure.  Most of it isn’t, though, and this is quite related to why those of us in Paris are going to be in a good position when the zombie apocalypse comes.

Part of many people’s stereotype of Paris is the grands boulevards, the wide streets that characterize much of the older part of the city.  Indeed, they are for real: as Wikipedia puts it,

The boulevards…now define Paris, with uniform façades and overhanging balconies stretching along them. These are immediately recognisable, and are under the strict control of Paris’ urban planners.

It’s not clear that they’re just there to be pretty, though.  A major part of the enormous urban renewal project that took place in Second Empire Paris between about 1850 and 1875 or so was the tearing down of the buildings around the old twisting, crooked medieval streets, and replacing them with these broad boulevards.  A number of reasons have been proposed for this particular aspect of the project, most of them not what you would expect.

Haussmann had to deal with this impediment if the redesigned city were to work.  As Rupert Christiansen puts it in his truly magnificent Tales of the New Bablyon: Paris in the mid-19th century, which tells the story of the Paris Commune, the siege of Paris during the Franco-Prussian war that preceded it, and the tail of the Second Empire, which preceded the siege:

Haussmann understood with genius one profound necessity of the age: the modern city’s dependence on its lines of communication, its capacity to move at speed.  [A] cliché is the notion that the chief reason for planning wide, straight boulevards was to allow for the strategic movement of troops in the event of rioting and to prevent the throwing up of barricades, but there is no evidence to suggest that this was anything more than a minor incidental consideration…The absolute priority was moving from A to B with the minimum amount of interference, in the minimum amount of time.

In fact, there was every reason to worry about barricading the streets of Paris.  Note that Christiansen doesn’t say that keeping rebellious Frenchmen from controlling the streets wasn’t an issue–he says that it was nothing more than “a minor consideration.”  Why worry?  In the revolution of 1830, the rebelling Parisians (it’s almost always Parisians that rebel, or at least that start it–the Fronde is the only exception that I can think of.  Native historians?)  immediately starting throwing up barricades.  A quote from the Wikipedia entry on the 1830 revolution:

In only a day and a night over 4,000 barricades had been thrown up throughout the city.

On 23 June 1848, the working class of Paris rose in protest over the closure of the National Workshops. On that day 170,000 citizens of Paris came out into the streets to erect barricades.[25]

They were effective, too, those barricades:

To meet this challenge, the government appointed General Louis Eugène Cavaignac to lead the military forces suppressing the uprising of the working classes…. Cavaignac’s forces started out on 23 June 1848 with an army composed of from 20,000 to 30,000 soldiers of the Paris garrison of the French Army.[25] Cavaignac began a systematic assault against the revolutionary Parisian citizenry, targeting the blockaded areas of the city.[26] However, he was not able to break the stiff opposition put up by the armed workers on the barricades on 23 June 1848….Cavaignac’s forces were reinforced with another 20,000–25,000 soldiers from the mobile guard, some additional 60,000 to 80,000 from the national guard.[27] Even with this force of 120,000 to 125,000 soldiers, Cavaignac still required two days to complete the suppression of the working-class uprising.

What do you make barricades of?  There are certainly a number of options.  Furniture.  Trees.  In 1848, omnibuses were used.  But, mostly, you build them out of paving stones.

Here’s a quote from a recounting of the beginning of the 1968 riots in the Latin Quarter:

The police surrounded the march on the Boulevard Saint Michel, halting the demonstrators’ progress. The students decided to occupy and defend the Latin Quarter, they spread into neighbouring streets and quickly started constructing barricades out of anything they could find. Many sympathisers – young and old – flocked to the Latin Quarter to join in the student revolt after listening to their exploits on independent radio stations. A passing builder demonstrated the use of a pneumatic-drill to students who were trying to dig up the cobblestones (the soon-to-be infamous pavées) from the street to add to their arsenal.  http://modernhistorian.blogspot.com/2009/05/on-this-day-in-history-night-of.html (bolding by me)

Notice the bolded text: the students started on Boulevard St-Michel, and then when they wanted to barricade the place, they went off into the side streets.  A small detail, but a telling one.  There’s a reason that you would need to leave the Boulevard Saint Michel if you wanted to build barricades–the Boulevard Saint Michel is a classically wide Haussmannian boulevard, and you’d have a hell of a time trying to block it off.  In contrast, the side streets in the Latin Quarter are stereotypically narrow.

And barricades are not all that pavés, the traditional Parisian cobblestones, are good for: they are “traditionally” used for throwing at whomever you happen to be barricading the streets against.  This goes way back–here’s a quote about paving stones being used as weapons in the 1830 revolution: Paving stones, roof tiles, and flowerpots from the upper windows… began to rain down on the soldiers in the streets”.[10]

…and it was a serious activity during the 1968 student riots.

So, yeah, Paris has some grands boulevards, but most of it is small streets, and it’s going to be a good place to be if you’re interested in keeping your street clear of zombies during the apocalypse.  Un homme averti en vaut deux: a word to the wise is sufficient.

Want more information about streets in Paris?  Here are a couple miscellaneous links.  French and English notes below.

la queue de paon: peacock tail.  This is the term for a particular pattern of paving stones that you’ll sometimes see in Paris.

cobblestone: A stone used for paving a street.  Merriam-Webster defines it more generally: a naturally rounded stone larger than a pebble and smaller than a boulder; especially :  such a stone used in paving a street or in construction.  The word goes back to the Middle English period (which was roughly 1100-1400).  In restless dreams I walked alone // Narrow streets of cobblestone (Paul Simon and Art Garfunkel)  Example from Wikipedia: Cobblestones are typically either set in sand or similar material, or are bound together with mortar.  How it was used in the post:  And barricades are not all that pavés, the traditional Parisian cobblestones, are good for: they are “traditionally” used for throwing at whomever you happen to be barricading the streets against.

9 thoughts on “The best place to survive the zombie apocalypse, and why Parisian streets are wide”