You can unscrew a lightbulb, you can unplug your monitor, and you can unbuckle your suspenders, so why can’t you unsee things?   It has to do with the prefix un- when it’s attached to verbs.  In order to be able to un- a verb:

So: you can see something, but you can’t unsee it, because when you see something, you’re not changing its state, and that’s the sine qua non of verbs that can take un-.

Ack–data!  I almost forgot that I’m an empiricist!  In fact, the verb to unsee occurs a lot.  It occurs with a frequency of 0.02 words per million in the enTenTen13 corpus (19.7 billion words of English, available on the Sketch Engine web site).  But, it’s cool: it doesn’t mean to undo the seeing of something.  When we talk about unseeing things, we’re usually talking about the very fact of not being able to unsee them, and what that actually means is this: we can’t forget them, and/or we can’t move beyond whatever we learned from what we saw.

In fact, the interwebs are full of talk about things that can’t be “unseen.”  Some examples:

Old guy at the YMCA was pooping with the door open. C’mon man I can’t unsee that.

Once you’ve seen the extent of the white supremacist colonialist cis hetero patriarchy you can’t unsee it. https://t.co/5bWf9kkGEE

Has anyone else noticed that the “&” looks like a man dragging his butt across the floor?? I can’t seem to unsee this.

Why does unsee work so well for this use, when it can’t have the meaning that you would think it would?  I suspect that it’s precisely because (a) it’s basically an impossible verb, and (b) it’s used only to describe an impossible action.  And, the fact that the meaning of unsee is not the meaning of see plus the meaning of un- is important here.  We’ve talked often about the basic principle of compositionality–the idea that meaning in language comes from something like “adding together” the meanings of different things.  Here is a case where the meaning is clearly not compositional–to unsee something, were it possible, would not be what it is if it were compositional.  (Were it possible explained below in the English notes.)  So: cool, if you think that it’s cool to violate the expectations of linguistics, computer science, and philosophy.  (I do think it’s cool, but maybe that’s why I’m single.)

The new Haussmannian buildings went up in the order in which their lots were appropriated, the old buildings torn down, and the new buildings financed.  That meant that it was often the case that buildings were put up that one day would have neighbors, but didn’t yet.  In anticipation of the need to line up with adjacent buildings–lining up with things was very important in Haussmann’s Paris–the front-facing walls of the buildings had projections that were meant to facilitate alignment with future neighbors.  So, pierre d’attente: “waiting stone,” I guess.  (I think they can also be called pierres d’accord.)

Pierres d’attente. Picture source: me, on the rue La Fayette, on a rainy day in January 2017. 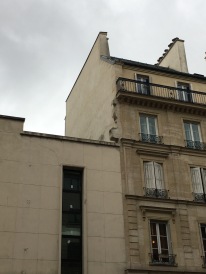 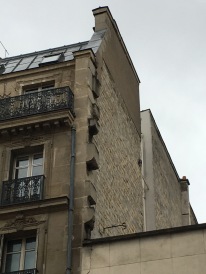 Now, at some point, architects realized that if you have pierres d’attente sticking out of the side of your building, they catch rain, and then it can run into your walls, and that is most definitely not a good thing for your building.  So, people started cutting them off, which is why you will see things like this:

But: not everyone was happy about this.  Haussmannian apartment buildings are part of our patrimoine, and pierres d’attente are part of Haussmannian apartment buildings, so those pierres d’attente are part of our patrimoine, and no asshole should be cutting them off, right?  Point taken, and cutting off your pierres d’attente is apparently no longer allowed.  But, hey, this is France, and we’re logical–so, what you can do is, you can cut them so that there’s a pente, a slope, on the top edge.  (I just had to throw the French word in there, on account of the fact that when I memorized it, I thought that I would never, ever get to use it–and there, my friends, is a very concrete example of Zipf’s Law in action.)

The guided tour was great.  Seulement voilà (the thing is)…the tour guide explained pierres d’attente to us, and now I can’t stop seeing them.  It’s OK–frankly, the more there is to occupy my fevered little brain, the better…

Anglophone students of French whine about the French subjunctive, and frankly, I’m not sure that Francophone professors are thrilled about teaching it to us, but: the fact is, English has a subjunctive voice, too.  Or, more accurately: it can.  This varies quite a bit by dialect, but English can have a subjunctive, in at least the following circumstance: talking about things that are not real at the moment.  For example, here are some options, with and without the subjunctive:

You can recognize the subjunctive by the weird agreement of If I were you, rather than If I was you.  Both are correct, and most Americans would say If I was you, but If I were you is more natural in my dialect.  (I come from a relatively obscure area in the northwest of the country.)

Again, you can recognize the subjunctive by the weird agreement of he give you versus he gives you.

How the subjunctive was used in the post: Here is a case where the meaning is clearly not compositional–to unsee something, were it possible, would not be what it is if it were compositional.  I chose obscenity-laden examples to make clear that this isn’t a formality thing–the subjunctive is just more natural in my dialect.  Again, most American speakers of English would say the form of these two sentences without the subjunctive, but both are fine.  I have no idea how this works in the United Kingdom–can any of you Brits comment on this?

15 thoughts on “Why you can’t unsee things: compositionality and Haussmann’s apartment buildings”