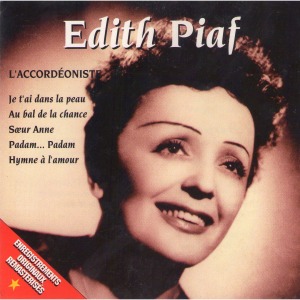 Edith Piaf was probably the most famous French singer of all time, at least outside of France.  It turns out that France is definitely the best place to buy her music–I picked up a 3-CD set at Les Invalides for ten euros.  Not surprisingly, Zipf’s Law strikes in Edith Piaf’s lyrics as much as anywhere else–I wasn’t able to get past the first line of her famous La vie en rose without consulting a dictionary.

According to the first French-language lyrics web site that I found, the first line of La vie en rose is as follows:

This didn’t quite sound right to me.  The word that I thought I heard when I listened to the lyrics was not baiser, but baisser.  (The single s is pronounced z.  The double ss is pronounced s.)  When I looked up baisser, I discovered that it means “to lower.”  This made sense, in context–the first line would then mean Eyes that make mine lower (themselves).  What didn’t make quite as much sense–although, crucially, it wasn’t like it made no sense at all–was what the lyrics web site said: baiser.

Baiser is a word that has always thrown me off.  As we learn in school, baiser means “to kiss.”  However, as I learned when I got to France, it also means “to fuck.”  I wish that I could say that this ambiguity has led to some hilarious misunderstandings in my life, but: no such luck.  Yet.