In the two years since I started writing miscellaneous and sundry stuff here, the blog has had 13,913 page views and 7,634 visits.  It’s hard for me to believe that what started out as a venue for sharing information about French judo clubs has turned into a blog that gets read by about 40 people per day from every continent on the planet—sometimes hundreds of people in a day. As time passed, this went from being a judo thing, to a place for me to tell my friends and family about my adventures in France in a longer format than Facebook is really made for, and then a place for me to record the French words that I learn every day (whether I’m in France, or in the US). At some point I realized that I just enjoy writing, and this blog became a place for me to scribble about whatever happens to be absorbing me at the moment, usually with some connection to the French language or to the contrasts between American and French society (to the extent that I understand either of them, which isn’t necessarily much). Sometimes I feel free to geek out on topics in computational linguistics, or the anatomy of speech, or the oddities of human language. At this point, about half of my readers come from outside of the US, and so I’ve started occasionally discussing odd corners of the English language–particularly slang and the grammar of casual conversation–along with my misadventures in learning the French language: basically, whatever garbage happens to be rolling around my head at the moment, but almost always with some connection to language, and particularly to French.

Amongst the 40 or so people who visit this blog every day, I’m especially happy about–and grateful to–the people who make my posts better by commenting on them, pointing out mistakes, adding native speaker perspectives, contributing pre-publication material and personal insights, sharing their experiences of the high points and the low points of the “Anglo-Saxon” expat experience in France, and just generally making what I write into less of a solipsistic meander and more of a conversation. I happened to look today at the number of comments that people have left on the blog–for your amusement, here’s the data: 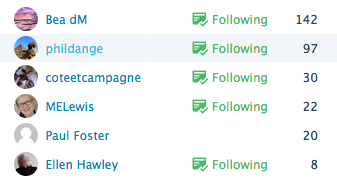 Thank you to all of you for your support, and a special thanks to Ellen Rosenblum for suggesting this in the first place!